I totally fell in love with the teeny tiny candy die from the latest Waffle Flower Crafts release - it's such a fun little thing so I thought I'd have a go at making it the star of my card. 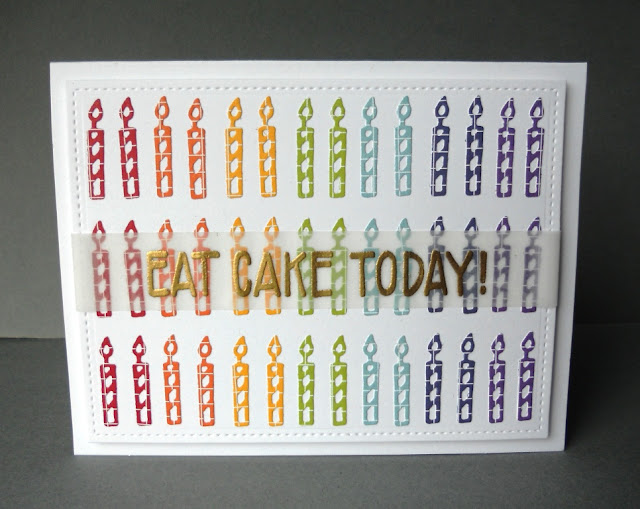 I thought it would look really fun to have rainbow of candles covering the card front so I set about cutting out a LOT of candles using the bright rainbow papers from MFT's Graphic Grid papers to which I added stick-it prior to cutting to make it super easy to apply all those candles!  I cut 6 of each colour and had 3 rows of candles on a panel I cut with stitched rectangle dies.

I wanted to pair it with the fun new birthday sentiment set also by Waffle Flower Crafts called "eat cake".   I embossed the eat cake today in gold powder onto a strip of vellum folded behind the panel.  I know sticking vellum can sometimes be tricky, but if you totally cover your strip with stick-it the glue isn't visible when you adhere it to the card.

I decided to use the other sentiment in the same set on the inside of the card and thought a few more candles would work there too.  I think we sometimes forget we can stamp on the inside as well! 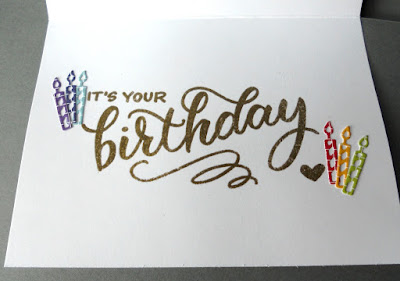 I used the gold embossing powder again for the sentiment and just added a few candles to either side.

You could do similar card with other tiny dies - lots of tiny hearts for a wedding or anniversary, or even rows of tiny stars or circles - why not check out your stash and get sticking! 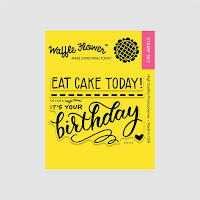 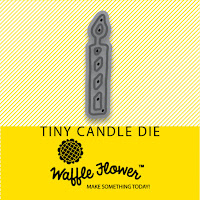 There will be quite a lot of new releases this month: