The first ice of the season

Sorry the blog is late today - I started my card before breakfast and then came back an ruined it so had to start again.   Today was one of those days where what was in my head did not want to appear on the paper!

So here is version 2.0 of my card featuring penguins playing on the first frozen lake of the season up in the mountains. 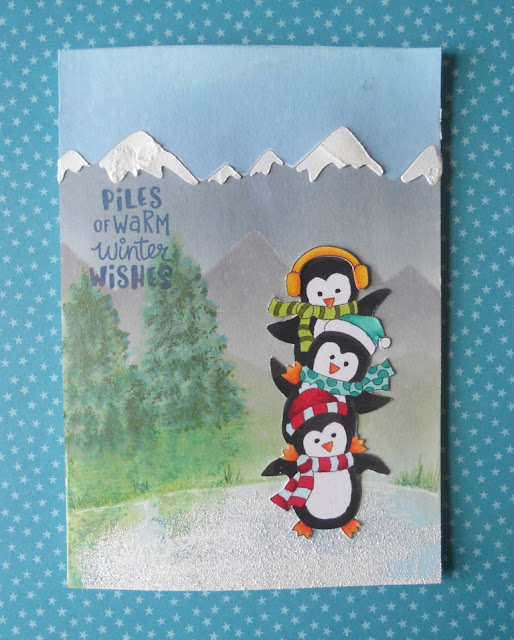 I started with a piece of 300gsm white card stock and the new mountain stencil from Newton's Nook - this is mighty little stencil that performs beyond it's 3inches!   I just started at the top with my oxide ink pads and used both edges of the stencil to layer in the mountains and hills.   When I got to the bottom I just blended blue into the green to create my lake area just using vertical strokes with my blending tool to keep the ice looking frosty.

Next I added my pine trees using the smaller tree in the new Plentiful Pine stamp from Altenew which features 2 sizes of trees with 4 layers to build up easy and realistic looking trees with simple to line up stamping.   I used the second generation image from each layer to add a reflection into the water too.

I added some swipes of versamark and some sparkling embossing powder to the lake to make it look solid enough to pop my pile of penguins onto.   The penguins are also by Newton's Nook - Penguin Pile - and the sentiment comes from that set too.   I coloured them with Altenew markers and then cut them out by hand as I wanted them to sit in the scene and the white edge from the die would distract from the realism here.

I added some grassy details with a few flicks from some pencils and finished by adding the snowy caps to the mountains simply by spreading embossing paste through the middle of the stencil.

It would have been quite a quick make if I hadn't had to do it twice! 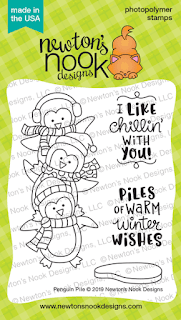 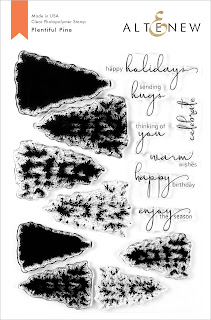 We have a shipment coming from Neat & Tangled which has their last couple of releases - as they now only have about 3 items a release we will order them every other month and get both at that time to make it cost effective for importing as we don't always have enough with restocks and just 3 new items to meet minimum requirements.

We have some new items from Echo Park/Carta Bella which will be in store this week too.

Otherwise it will be a quieter week but there will be new releases to order for December.  This is generally a quieter month but there are a couple of major releases including the new Lawn Fawn release on the 12th December.