A Whole Lotta Foiling Going On

Good morning, hope you had a wonderful summer - today is officially the first day of meteorological autumn, my favourite season, particularly for the abundance of my favourite foods and the fact that its not too hot to walk around but still pleasant.  Love it.   It's also when thoughts drift towards Christmas so today I have 4 Christmas cards to share - all featuring foiling (without the need for a foiling machine) and lots of new items from the Hero Arts Winter Catalogue that is now live in store. 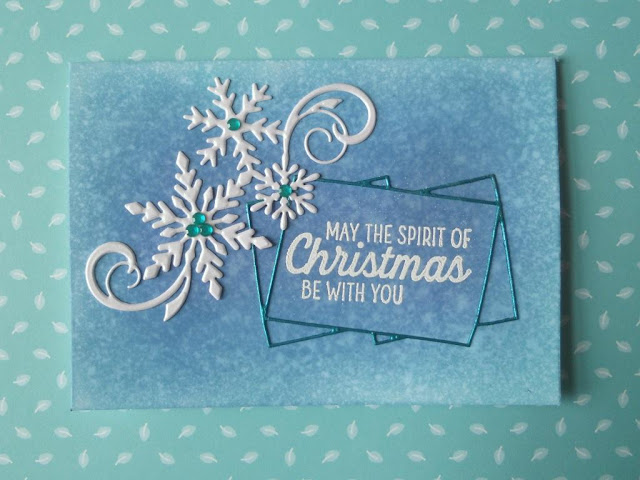 I used 3 shades of blue oxides and after blending out from the centre from the darkest to lightest shades and sprayed with water and blotted off with a paper towel to get a soft snowstorm effect.  My foiling on this card is very subtle, but it does add a nice touch which shows up better irl.  I used stick-it glue over teal cardstock and then rubbed aqua foil onto it before die cutting the Altenew Crystal Frame Die from it.   The snowflake cluster die from Hero Arts was cut from Lawn Fawn Pearlescent Vellum (again shows up more shimmery irl but is impossible to photograph) which was glued to white card with more stick-it (then you don't see any of the glue!    Finished with a white embossed sentiment also from Hero Arts and a few teal gems.


Next up, I took the die cut foiling technique to the next level with the new Poinsettia Ornament die from Hero Arts and with the aid of stick-it, gave it a full-on two-tone foil finish which I just love and its really easy and fun to do! I started with cranberry card from Hero Arts and covered it with a layer of stick-it - and after running it through the die cutting machine with the stick-it side up DID NOT REMOVE the release paper - this is the key to this two colour technique.  I took my craft knife and carefully trimmed through the release paper where the bits I wanted in gold joined the bits I wanted in red.  Removing them one at a time, I could then gold foil the berries and flower centres whilst the release paper was still in place on the red areas.  (see the top two photos below) 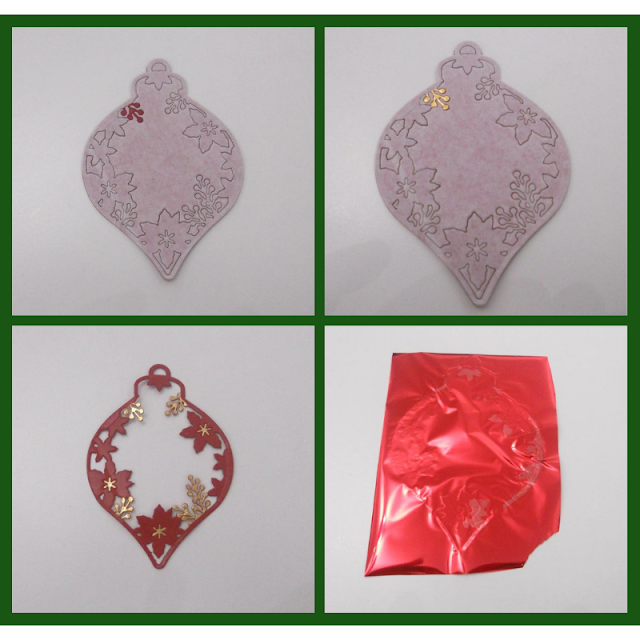 Once all the gold is foiled, remove the "waste" areas and then removed the release paper from all the remaining areas and then pop a piece of red foil over the top and rub the foil over with your finger (or a bone folder is a great tool for this technique too) and then you get a perfectly foiled ornament!  Simply added to a card with a heat embossed sentiment from Hero Arts Winter Holiday Messages (tip  - I stamped with the ornament in place but NOT adhered, then removed it before applying heat so I didn't damage the foiling, that way the sentiment is where I wanted it and its easy to just adhere the ornament around it afterwards)  I drew a border with a fine liner to finish.

Next I did some tiny bits of foiling just using wet glue - it you apply a really thin layer of glue and wait until it's tacky but NOT wet, then you can apply foil that way too!  I used it as accents within the new Layering Snow Globe die from Hero Arts. 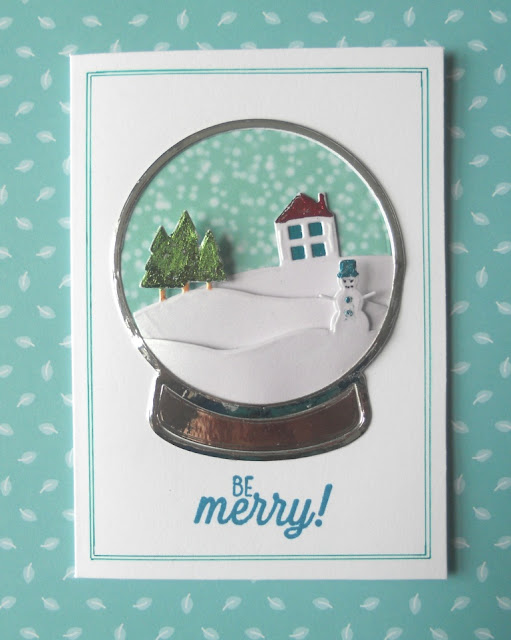 I used the same technique as from the snowflake to layer the pearlescent vellum onto white card so I could cut each "layer" and know my glue wouldn't show through.  I then applied wet glue to the trees, house roof, snowman and applied the foil once tacky.  Perfect little highlights of foil.  The missnow globe itself I cut from silver mirri card and the background in the globe is from Lawn Fawn's Snow Day Remix paper pad which is my all time favourite pad for Christmas backgrounds so I am so glad they brought it back as I used my old one up!   The sentiment again comes from Winter Holiday Messages.

I have one final card to share, which had a couple of mishaps, but I managed to rescue it enough that I could still share it even if it could be better (will make sure I do better on the next version!)   For this one I used a brand new stencil from Simple Stories with Altenew Embossing Paste as that is another easy way to get foiling without a machine! 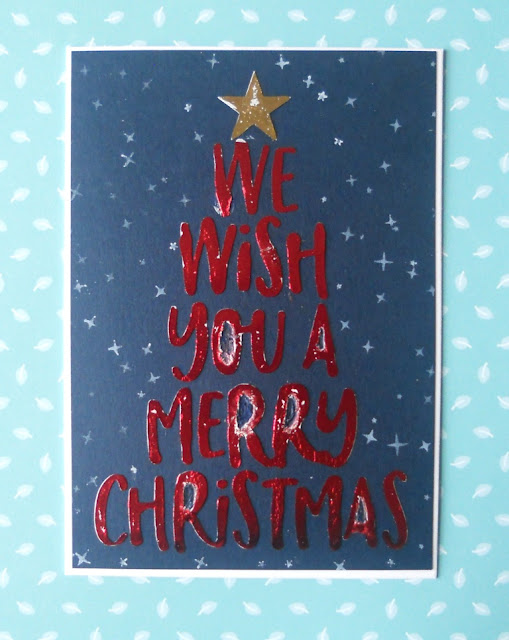 I started with a piece of navy card stock and applied a thin layer of paste through the stencil, lifted it off and washed the stencil straight away so the paste didn't dry on it and ruin it.   This is where my error came - as the stencil has solid letter centres, the paste in those letters wasn't as thin as it should have been, so even though I left my foil to dry over night, when I lifted it off this morning, the centres were still wet and therefore the foil hadn't stuck there.   The technique is to lay the foil gently onto the paste, leave it for about 30 mins so it starts to dry a little, and then gently rub it over the paste so it catches the edges, then leave it overnight to fully dry.

So rather than bin it, I took craft knife and carved out the centres, there is a little white edge of paste showing, but I can live with that for this one, and on the next one I know to make sure to check the paste is thinner in those larger areas (or to remove it if you want the letter centres to not be there)

The starry background is from another new stencil which will be in store tomorrow, check out the Echo Park section to find it and lots of new Autumn/Christmas themed papers, stencils, embossing folders and washi tapes.

Hopefully that gives you a few ideas of how to work with foil as its definitely the season for it! 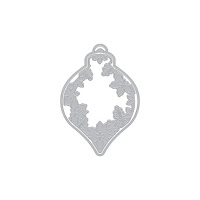 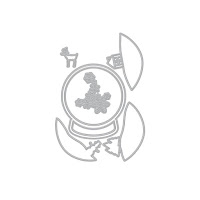 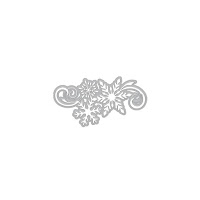 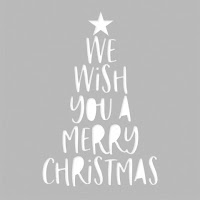 As I said above, we'll have a few new collections from Echo Park/Carta Bella in store tomorrow

The new Waffle Flower release is in transit and will go live on release day or as soon as we get it.

We've got the collaborative Hero Arts stamps on order and expect them at some point this month.

We have a new collection from Colorado Craft Company in transit with a fun spooky theme, and that will be in store as soon as we get it after they release it on Tuesday.

We have new Sugar Pea Designs, Concord and 9th and Altenew releases on order, all due mid-September or earlier customs willing.

We have a very large Lawn Fawn restock order in, but we are waiting to see what they have available from the new release and have asked to wait til they get it back before it ships if it is out of stock but we've not heard back form them as yet.  A few items that were on back order (like the notebooks) have already been shipped to us but they went USPS by mistake so will take a couple of weeks to arrive.

We are bringing Flora and Fauna back for their Christmas release, and have added a small quantity of the releases from this year we missed to go with them.  We are waiting on them to ship.

As Neat & Tangled are now only releasing 3 products a month, we are still going to carry them, but will only order every couple of months to make ordering cost effective so the latest release will be coming later this month with their September release.

Our servers are being moved to a new facility by our hosts this month - we have influence over the date so please note that the store will not be online at all from 6pm on 13th September until the early hours of 14th September (there is no finish time as it will just happen as quickly as possible) but if you can't see the store during that time, that's why and it will hopefully reappear on Saturday morning without issue.

That's all for today - catch you later.